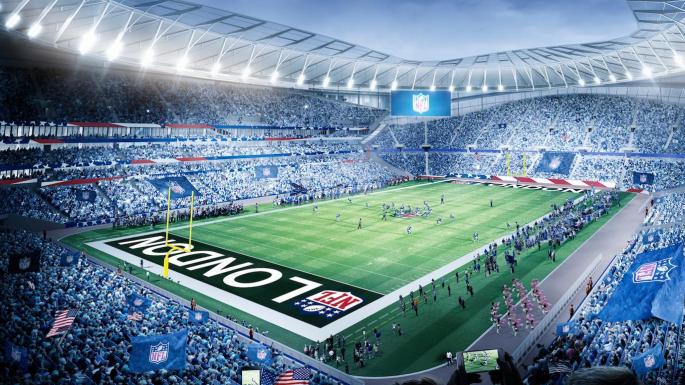 Spurs plan to stage football and NFL on the same day

Daniel Levy, the chairman of Tottenham Hotspur, has raised the prospect of the club’s new stadium being used as a permanent home for a London NFL franchise with American football matches even taking place on the same day as Premier League games.

Spurs’s new 61,000-seat stadium will hold at least two NFL games a year and Levy is looking at options for a retractable pitch that would allow a synthetic surface to be used for American football and protect the grass, with a changeover taking place within two hours.

We worked together [on the design] because it needed to be viewed as a combined joint soccer and NFL stadium.  Daniel Levy

Any moves to make Tottenham’s ground a permanent home for an NFL franchise would have to be approved by the Premier League board, which would also insist that Premier League fixtures and the playing surface for football were given priority.

In an interview with ESPN, Levy said that the prospect of playing a double-header on the same day was entirely possible. “I don’t think it’s something we’d want to try our first game, but that is certainly realistic. How exciting is the idea of having the two biggest leagues in the world from a television perspective — fantastic — play on the same day,” he said.

A ten-year partnership is already in place that will mean two NFL matches a year are hosted at Tottenham’s new home, which is scheduled to open for the start of the 2018-19 English football season, with construction work on the site next to White Hart Lane forcing them to play this season’s Champions League fixtures at Wembley.

The NFL has raised the possibility of a permanent London franchise in the future and Levy believes that Tottenham’s new stadium would present a ready-made home.

“We would welcome very much close co-operation with the NFL and a dedicated team,” he said. “The decision is entirely theirs whether they do bring a team to the UK, and where it would be located is something that would be talked about, but yes, we would very much welcome that scenario.

“We worked together [on the design] because it needed to be viewed as a combined joint soccer and NFL stadium.

“In fact, the way we designed the whole experience is one side of the stadium is a dedicated soccer entrance and the other side is a dedicated NFL entrance.

“If it ever got to a stage where the NFL decided it wanted to have a permanent team in London, this stadium could literally be — whatever the team was — their stadium as opposed to an NFL team feeling they’re renting Tottenham’s stadium.”

Harry Kane, the striker, has said that the Spurs squad is stronger this season than it was last term — but that they need to prove it.

“We’ve bought some great players in who have fitted in perfectly,” he said,

“So now we’re ready, we’ve got a lot of games, being in the Champions League against tough opponents. We definitely feel we’re ready to go and we’re stronger than last year. The performances haven’t been amazing. There’s still room to improve. But we’ve got some good results against some tough teams.”