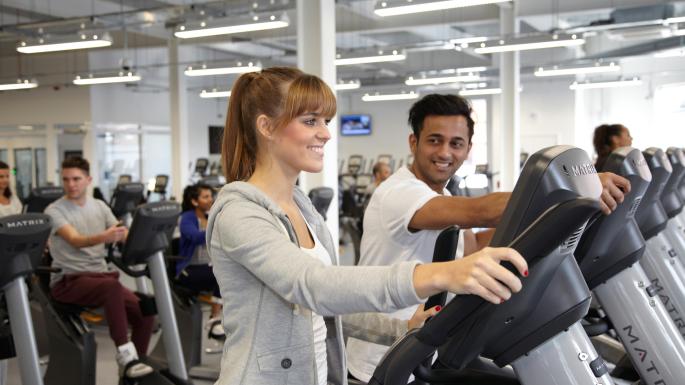 Grab your Lycra and willpower, it’s the annual January fitness drive. Many gyms expect to profit from widespread (if short-lived) new year’s resolutions about exercise.

Yet can they also expect to benefit from shallower pockets?

The Gym Group, the low-cost fitness chain that offers “membership” from £10.99 a month without tying you into a long-term contract, was a recession success story. It was launched by John Treharne, 62, an accountant and former England squash player, who opened his first branch in Hounslow, west London, in 2008, just before the collapse of Lehman Brothers and the resulting global economic slowdown.

Defying expectations, the group grew, opening 20 gyms in three years. It seemed that as disposable income and economic optimism fell, people’s desire to exercise did not fall in tandem. At least, not if it was cheap. The Gym Group branches are open 24 hours and offer the same popular workouts available at more expensive rivals for a fraction of the price. Last year Fitness First gyms charged £52 a month for a 12-month, multi-site contract. You could sign up for a month, but only by paying £72.

The Gym Group, along with Leeds-based Pure Gym, its biggest (unlisted) rival, expects membership to rise by between 10 and 20 per cent this month, with a third of 2017’s new members joining in the first two months of the year. The group floated on the London stock exchange in November 2015 with a valuation of £250 million. It was the first fitness chain to float in London in nearly 15 years. Pure Gym’s planned initial public offering (IPO) was cancelled in October with the company citing “challenging IPO market conditions”.

The Gym Group shares performed well, rising 34 per cent past the opening 270p. In August it reported its first pre-tax profit (of £3.4 million), and a maiden dividend of 0.25p a share.

It continues to grow. In the six months to the end of June the group opened a further six gyms, taking its total to 80, with up to 20 more planned this year. Members have increased almost 20 per cent, up to 424,000. Next week the group releases its year-end trading update. It has been a bit of a rollercoaster year for share prices, which plunged after the Brexit vote in June, then again in November to 155p and are now hovering at about 180p. Analysts attribute the November fall to rocky market conditions, compounded by the election of Donald Trump, concern about Brexit and a sense that fund managers are moving out of growth stocks and into value.

However, budget businesses such as The Gym Group are designed to weather difficult economic storms, while exercise continues to be big business. The gym industry, which last year recorded a 5.8 per cent rise in members and a 5.4 per cent rise in market value, is worth £4.4 billion.

It’s not only bargain fitness centres that are thriving, there has been a boom in boutique gyms too. Barclays Business said that the number of its customers operating a small health and fitness venture rose by 37 per cent between 2012 and 2015. Niche centres such as the trendy London-based Frame and BLOK, and Digme Fitness, a spinning studio similar to New York’s popular SoulCycle, are growing. Many charge between £10 and £20 a session, but people are willing to pay and investment is forthcoming.

It is the middle of the market that is suffering, the chains that cost more, but lack the high-tech, swanky design and trendsetting classes of their boutique rivals. LA Fitness, the chain based mainly in London and the southeast, was bought in 2015 by Pure Gym. It is understood that DW Sports, run by Dave Whelan, the former owner of JJB Sports and the owner of Wigan Athletic FC, is set to buy many of the sites occupied by Fitness First and that The Gym Group will take on some of the others.

Some compare the polarisation of fitness brands to the hotel sector, where budget chains such as Premier Inn have flourished along with smaller spa hotels such as The Pig Hotel brand and others favoured by the high-end bookings website Mr & Mrs Smith.