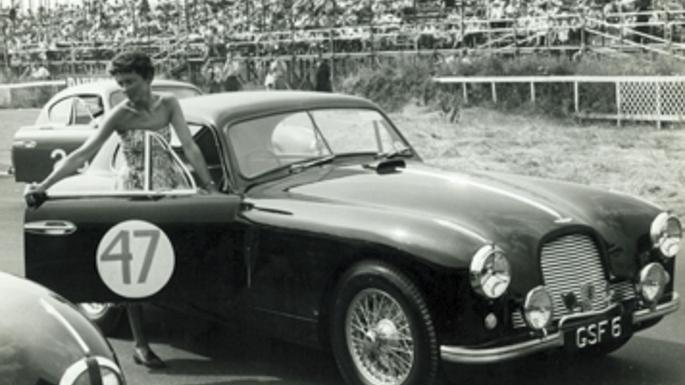 Fast, unyielding and glamorous, Jean Bloxam was small of stature but a lion-hearted racing driver and a pioneer for women in the male-dominated world of motorsport.

The youngest daughter of a cotton mill owner from Lancashire, Bloxam loved cars from an early age and went on to enjoy a short but successful career in the late 1950s when she raced some of the best male and female drivers of the day at tracks including Goodwood, Silverstone, Mallory Park, Crystal Palace and the Nürburgring.

Her career was made possible by her first husband — the car and racing enthusiast Roy Bloxam — who realised his wife could drive like a demon and persuaded her to take part in her first race. It was the Ladies Race at the 1955 Goodwood International Whitsun meeting and the seven-stone Bloxam, at the wheel of a five-year-old Aston Martin DB2, surprised herself by finishing third.

It proved the start of what she later described as the best five years of her life as Bloxam went on to compete in club races, hill climbs and 29 major races in which she recorded seven wins, four second places and four thirds. In 1956, while driving a Lotus in that year’s Ladies Race, again at the Goodwood Whitsun International meeting, Bloxam thrilled the crowd when she lost control coming out of the final corner and then spun on the grass the whole length of the pit straight. She still finished fourth and posted the fastest lap.

Later that year she drove masterfully in the Arthur Bryant Memorial Race at the St John Horsfall meeting at a windy and extremely wet Silverstone. This was a race only for Aston Martins, handicapped according to types, and Bloxam was untouchable.

“The undoubted favourite was Jean Bloxam who had been lapping very quickly indeed in appalling conditions,” Autosport magazine reported. “Graham Whitehead in the DB3S had a formidable task to beat her under any conditions, but on the skating rink that was Silverstone, he hadn’t a hope unless she blew up, or flew off the road. In the event she did neither, drove absolutely beautifully and was extremely fast, getting through to the front and winning unchallenged in fine style.” In 1957 Bloxam was awarded the Peter Bell Trophy for the most successful Aston Martin driver of the year.

Her biggest setback came when she was involved in a nasty accident in her Aston Martin DB3S on the way to Silverstone. A driver pulled out of a turning in front of her without looking and, although Bloxam managed to spin her car to engineer a side-on impact, the crash left her with skull fractures, requiring two operations in Stoke Mandeville Hospital. During her treatment a tetanus injection led to blood poisoning and long-lasting allergy issues.

In those days travelling to circuits in the same cars that they would later race in was standard practice for racing drivers and Bloxam — who had been told by her driving instructor that she drove too fast — occasionally gave in to the temptation to race on the open road. On one occasion she was on her way to a race meeting at Aintree when she was flagged down by the racing driver Innes Ireland, who suggested that he and Bloxam should race through the Mersey Tunnel at full bore to enjoy the full range of acoustics as they worked their way up through the gears. Bloxam duly hammered her Aston DB3S under the Mersey alongside Innes’s Lotus, arriving at the other side to what she called a “sensational” police reception.

“I pulled off my hood and smiled sweetly at them,” she recalled. “‘God — it’s a woman,’ they said. ‘What the hell do you think you are doing?’ I said feebly: ‘Listening to the wonderful echoes.’ Their reply was: ‘Never, ever do that again or we will have you incarcerated for life — now off to Aintree and make wonderful echoes there.’”

Bloxam’s career came to an abrupt end shortly after that in early 1961 when her husband was racing his newly acquired Lister Jaguar for the first time at Goodwood. He lost control at the Fordwater corner and hit a marshal’s box and died shortly afterwards. “A dreadful day,” Bloxam recalled many years later. “We did motor racing for fun. I couldn’t believe it and that is when I stopped. [Roy] had made it all possible for me and had given me every support and encouragement.”

Jean Noel Edwina Bloxam was born in Lytham St Annes on Christmas Eve in 1926, the youngest of four children of Arthur and Ethel (née Gilmour) Liver. Her father, who died when Bloxam was seven, owned a cotton mill in Preston and, by all accounts, Bloxam’s was a happy and comfortable childhood. The Lake District was a holiday haunt and she returned there throughout her life.

Bloxam inherited her love of cars from her mother, who was passionate about motorsport. She had been one of the first women to pass the driving test when it was instated and, on her husband’s death, immediately swapped the sensible Itala family saloon for a more exciting four-litre Lagonda. It was in this car that Bloxam and one of her sisters were driven to school by their mother — all the way to Poltimore College in Devon — freezing to death in the back but loving every minute of it.

After school Bloxam joined BOAC as an air hostess and then BEA and remembered once looking after Winston Churchill on one of his visits abroad. She married Roy Bloxam in the early 1950s. After his death she then married for a second time to Mike Salmon, a racing driver who was a partner in the garage business that the Bloxams ran at Gerrards Cross in Buckinghamshire.

Although Bloxam never raced again, she remained heavily involved in the car business, helping to deliver sports cars across Europe with Salmon. She regularly attended meetings from Silverstone to Le Mans where Salmon was driving, often helping to keep time on the track, and enjoyed attending historic racing events at Goodwood. Salmon, who competed in 13 Le Mans 24 Hours races, died in January this year.

During his tenure as president of the British Racing Drivers’ Club (BRDC) in the early 1990s, Innes Ireland was astonished to discover that Bloxam was not already a member. This was rectified in 1993 when she was proposed by Sir Stirling Moss, against whom she raced at Goodwood. In 2001 she became a full BRDC member, something Bloxam described as the proudest moment of her life.

Bloxam never saw herself as a trail-blazer for women — she drove because she enjoyed it, once remarking that during a race her concentration was so fierce that there was never a moment to feel frightened. Yet she gave as good as she got when subjected to what she regarded as a patronising remark and she was proud of her racing days and the medals and more than 60 trophies that she amassed. Something of a tomboy — who once graced the pages of British Vogue — she was rarely seen in anything other than trousers. She never had children but had a series of much-loved dogs, a particular favourite being a dachshund called Drogo.

Unbowed by age, Bloxam enjoyed driving a car fast all her life. Even in her later years, after she and Salmon had moved to Jersey, she still enjoyed outings in her “racing domino” — a nippy Daihatsu Domino that was perfect for the island’s small roads. They also took great care of their cars and when they sold their Ferrari 275 GTB 4 in later years, the much-vetted new owner was told to ensure that he was wearing clean trousers.

It was a telling detail that at Le Vert Pignon, the old cottage that they renovated on the island, there was mains water for the garage and for washing the cars but the house and those inside it had to make do with water from a well.