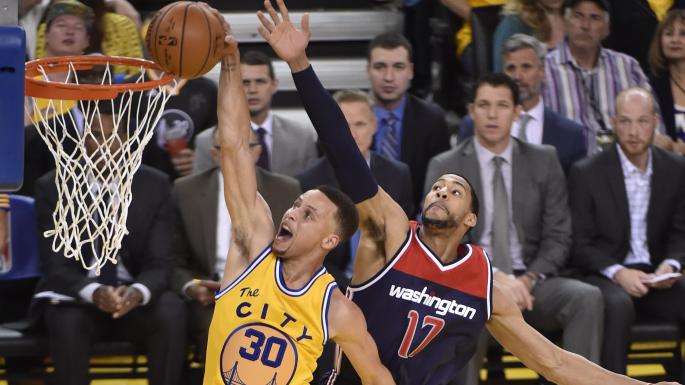 Like all the best plans, the scheme that turned the Golden State Warriors into the most compelling story in American sport looked a little crazy at first.

Six years ago a group of executives led by a Silicon Valley venture capitalist paid a record $450 million to buy a Californian basketball team that had the second-worst record in the league.

The new management then sold their star player and rebuilt the team around an unproven player who was ignored by all the major university recruiters when he left school, had a suspect ankle and, at 6ft 3in was dwarfed by the biggest names in the sport.

Their guiding insight, driven by data, was that basketball was being played the wrong way. The slam dunk, where a player soars above the rim of the basket and plants the ball through the net, had for decades been the sport’s signature shot. But it is worth only two points.

The executives at the Warriors redesigned their team to shoot from distance, from beyond the line, about 24ft from the basket, where shots count for three points.

The results have been spectacular, with the team pioneering “a basketball style no one has yet figured out how to defeat”, according to The Wall Street Journal.

Last June the Warriors became National Basketball Association (NBA) champions for the first time in 40 years, but it is this season’s results that has really made sports fans across America sit up and take notice.

The team stands on the verge of making history. If they win for a 73rd time in their final regular season game against the Memphis Grizzlies at home in Oakland tomorrow night they will overtake Michael Jordan’s Chicago Bulls team of 1995-96 as winning the most victories in a season. The team has done it by sinking more than 1,000 three-point baskets, by far the most in NBA history.

President Obama, a basketball fan who supports the Bulls, called the Warriors’ lineup “nuclear” when they visited the White House in February. “They are so good that they seem to be just breaking the game itself,” he said, marvelling at how their long-distance shooting and complex passing was revolutionising the game. “It’s almost not fair.”

Steph Curry, their diminutive playmaker, is now a household name and is widely acknowledged as the best player in the game. He is also an advertisers’ dream — he plays with a smile, looks more like a normal human being than most of the giants who hold sway in the NBA, and is a devoted father who met his wife at a church youth group when he was 14.

Curry is on course to score more than 400 three-pointers this season. Nobody else has ever made more than 270. And his accuracy is astonishing: Curry, 28, shoots better from 30 to 40ft than the average NBA player does from three to four feet. He averages almost 30 points a game and scores with 50 per cent of his shots, including an astonishing 45 per cent of three-point attempts.

Fans have begun turning up in droves to watch his warm-up routines, which include shooting from inside the corridor to the players’ tunnel.

As Curry’s effectiveness has grown, teams have attempted to mark him more heavily, but doing so creates space for others and reduces congestion around the basket itself.

That means that opportunities for two-point scores are also more frequent, although the team’s total commitment to three-pointers means that they often snub them anyway.

On Sunday Klay Thompson, the team’s second-best long-distance shooter, became the first person other than Mr Curry to score 270 three-pointers in a season.

Their coach is Steve Kerr, a member of five NBA championship teams including the record-setting Bulls, who had retired with a 45.4 per cent shooting rate on three-pointers, the highest in league history.

When he was hired in 2014 it was his first NBA coaching job, an appointment that was seen as extraordinary in professional US sports but would be routine in the forward-looking venture capitalism world from which Joe Lacob, the team’s main owner, comes.

It was one more example of the management team’s unconventional approach, which has also included knocking down all the walls inside the team’s headquarters. Gib Arnold, a former University of Hawaii head coach, who spent time observing the Warriors operation last year, called them “Google in the NBA”.

Tomorrow the Warriors have their shot at immortality, but for the players the real challenge lies beyond that. A second championship in a row would strengthen their claim to be the greatest basketball team in history.