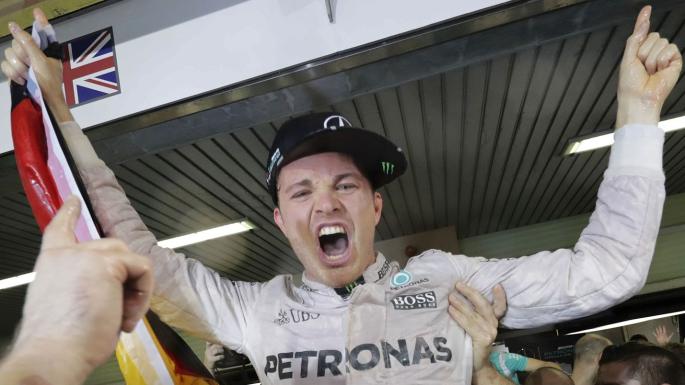 After playing catch-up for most of his career, German finds glory at long last, Kevin Eason in Abu Dhabi writes

When it came to the crunch, the boy they nicknamed Britney had enough steel to overcome nerves that shredded by the second.

When it came to the chequered flag, the blond bombshell tagged with the pop star’s name because of his good looks exploded with relief. Nico Rosberg was so drained that he looked as though he had been dragged out of the warm waters of the Persian Gulf and hung on a washing line.

The driver who was pent up to the point of silence as the magnitude of the Abu Dhabi Grand Prix dawned on him could not find the words to express himself last night. He shook his head and talked of “the worst race of my life”, a race laden with anxiety that had torn into his core. Lewis Hamilton, the three-times world champion and all-round superstar, had spent days teasing his team-mate without a title, the driver he raced as a kid and beat, as he tried to worm his way into Rosberg’s brain.

But Rosberg stayed focused, just as he had all year, relentlessly determined not to be shoved aside in a triumph of grit and dedication over Hamilton’s extravagant skills.

Hamilton left Abu Dhabi last night in graceless fashion, still sounding off about his mechanical misfortunes and pointing to a record of ten wins after his Abu Dhabi Grand Prix victory to his team-mate’s nine, as well as a score of 12 pole positions to eight for Rosberg.

The German deserved more than the cursory handshake that came on the podium at the prompting of David Coulthard, the former driver turned television pundit. Rosberg has been knocked down time and again by a Mercedes team-mate who even he acknowledges may just be the most naturally talented that we have ever seen in a racing car.

Yet, he has dragged himself back from the depths and refused to be cowed into submission by Hamilton’s pointed pronouncements that he is the better man. Hamilton tried to destabilise Rosberg — and most of this weekend it seemed that Rosberg was sagging under the weight of expectation that he would fall at the final hurdle.

Imagine the ignominy of allowing a 12-point lead to slip at the final race; the humiliation would have been almost career-ending — and Rosberg knew it. Hamilton has been his nemesis since he was a teenager and spent year after year in the shadows while his team-mate has been lauded across the globe.

And still Rosberg came back for more — and now he has finally achieved not only his personal dream, but also the dream of a racing family. Thirty-four years ago, Keke Rosberg, his father, was crowned world champion and now the Rosbergs become only the second father-and-son combination to become Formula One world champions after Graham and Damon Hill.

The agony of being so close was too painful for Keke, who was holed up in a hotel in Dubai watching on television with a beer at his side. Mum Sina — who usually vacuums the family apartment in Monte Carlo when her son races — could stand it no longer and high-tailed it from the hotel to the Yas Marina circuit to greet her son at the end of an exhaustingly tense race. Their hug was so long, it broke records.

Keke, who has studiously stayed out of his son’s career, attending only a single race this year, set off as soon as the chequered flag dropped to join the celebrations. The Rosbergs like their vodka — and there was to be plenty on order last night to calm nerves stretched to breaking point.

“I hope my dad survived that race,” Rosberg said. “I am sure it was pretty intense. Every Saturday night I get a message from him and most of the time it is, ‘Pedal to the metal!’ It has been good how he has let me get on with it. It was his way of stepping back a bit.

“It feels like I have been racing Lewis for ever and he has always managed to just edge me out, even when we were small in go-karts. He is an amazing driver and one of the best in history, so it is just unbelievably special to beat him. That makes this so much more satisfying. He set the benchmark and I took the world championship from him.”

As he sat in his post-race press conference, tears tumbling from reddened eyes and puffing out his cheeks with regular exclamations of “phew”, Rosberg gazed down at Vivian, his wife. She blew him a kiss of reassurance as he recounted a journey that started in Texas last season, when Hamilton barged him aside to claim a third world title, a second in Mercedes colours.

“That was a big turning point,” Rosberg said. “It was a horrible experience. I spent two days alone thinking and I didn’t want to experience that again. But I went and won the next seven races on the trot. That helped bring me to today.”

Rosberg reappraised the way that he raced. If he could not be faster, then he could be smarter. The driver who almost enrolled at Imperial College London to study aerodynamics and engineering had learnt at the knee of the master when he was partnered with Michael Schumacher, the seven-times champion, when Mercedes started their team in 2010.

He learnt how to be “the other bloke”, as he says, when 300 camera crews turned up at the launch all wanting to talk to Schumacher. No one wanted to interview him. He survived the mind games when Schumacher once boxed in his car so he couldn’t leave the track. But he watched Schumacher work and marvelled when the great champion announced his retirement but then spent two hours in an engineering debrief.

Schumacher had no concept of being beaten and Rosberg adopted that same focus, concentrating hard on each race as it came, shutting out the noise from Hamilton and paying attention to the tiniest details.

Rosberg hit on the idea of having the fingers of his driving gloves restitched so that he would have more feel. Hamilton soon followed suit. While the Briton roamed the red carpets of the world, Rosberg practised his starts on the team simulator to iron out the glitches hampering Mercedes. Hamilton eventually followed and conquered his starting grid wobbles.

The escape from Hamilton’s shadow will be as tough as any assignment on the way to this maiden world championship, though. Rosberg has been asked over and over whether he would be a worthy champion and all he could mumble was that he had done his best.

For years, his best has not been good enough, but last night, under the brilliant light of 5,000 high- powered bulbs, Rosberg finally emerged from his team-mate’s shadow as the new Formula One world champion.

Briton defied team orders to speed up
Lewis Hamilton was instructed on three separate occasions, including by his team’s executive director Paddy Lowe, to pick up the pace. Speaking after the race, Toto Wolff, the Mercedes team principal, said that the order came as they were concerned about the pace of Sebastian Vettel in the Ferrari, who began to lap two seconds quicker towards the end. Despite that, Hamilton defied his bosses’ orders and continued to drive at a slow pace in a bid to back his team-mate, Nico Rosberg, into their rivals’ path and get two cars behind them so he could win the title.

Lap 44: Race engineer to Hamilton “Pick up the pace. Vettel an imminent threat.”

Lap 47: Race engineer to Hamilton “This is an instruction. You need to be lapping at 45.1” Hamilton replies “I thought you guys would let us race.”

Lap 50: Paddy Lowe, Mercedes executive director, to Hamilton “Lewis, this is Paddy. We need you to pick up the pace. This is an instruction.” Hamilton replies “I’m comfortable with where I am.”

Lap 53: Hamilton on radio “Right now, I’m losing the world championship so I don’t really care whether I win or lose this race.”